This is something I’d like to do as a law-review style article or book chapter at some point.  But that could take years and cost millions of lives.  In the interim, here are the highlights.

When Thorvald Solberg was named the first Register of Copyrights in 1897, he faced daunting problems, and fixing them would consume his first years in that position.  The Library of Congress – including the copyright material- was moving to its new building, now the Jefferson Building, immortalized in a semi-famous photograph. 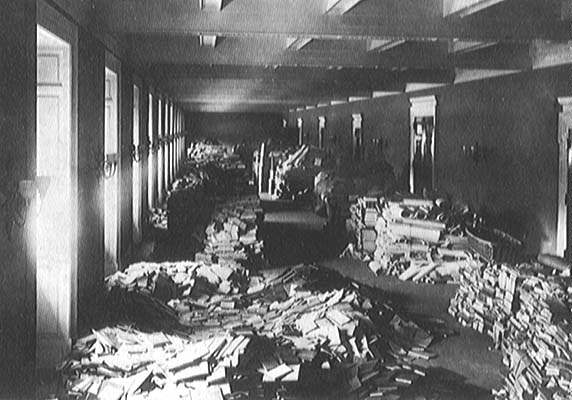 Following that came the task of modernizing the business of copyright registration – although Ainsworth Spofford (Librarian of Congress 1865-1897) had effected the centralization of copyright registration, in contrast to the earlier practice of registering copyright in the local federal court, the actual record-keeping done by Spofford was no better than what was done by the District Courts, with a general ledger of copyright registrations being kept, containing a few fields of basic information and then individually signed by the Librarian.1  At the beginning of the 20th Century Solberg introduced the “XXC” classification system and system of application forms, which would be used in modified fashion until the effective date of the 1976 Act.  In 1903 the Copyright Office improved the Catalog of Copyright Entries as it evolved from an obscure circular into a proper catalog, including statistical information for the first time.

Solberg’s Observations on copyright record-keeping, original in Thorvald Solberg Papers at the Library of Congress

Also at the beginning of his tenure, Solberg effectively engineered the appointment of Herbert Putnam to be librarian, and would serve alongside him from 1899-1930 (when Solberg retired).  With the Copyright Office reaching a certain operational stability, attention then turned to the question of reforming the copyright laws.  It’s fairly well-known that the original 1790 Copyright Act was largely an Americanized version of the 1710 Statute of Anne.  The 1831 Act was a major advance, expanding the scope of copyright (music was not technically protected by the 1790 Act, for instance, although in practice music was registered as a “book” or print”), and making many other reforms.  For most of the nineteenth century the main question of American copyright law was whether to extend copyright to foreigners, a measure that did not become law until 1891.  In the interim there had been an omnibus revision to all intellectual property laws in 1870 – including a revised patent code and the first instance of federal trademark law – but aside from the change of venue to the Library of Congress, the 1870 Act was not a major shift from the 1831 Act.  By the early 20th century motion pictures and sound recordings were already being widely consumed, and a heavily modified copyright law from an entirely different era was clearly inadequate.  Given that international copyright had withstood a number of challenges in its first decade and now felt secure, it was time for a 20th century copyright law.

Beginning in his 1901 Annual Report, Solberg would annually advocate for a new copyright law.  The ball began rolling in the Senate Committee on Patents, which requested that a commission be formed to study the copyright laws in January of 1905, after which the Librarian delegated to Solberg to plan a series of conferences to meet with copyright industry representatives in the Spring of 1905 to the Spring of 1906.  Transcripts of these conferences were created and were much later compiled as part of the printed Legislative History of the 1909 Copyright Act, currently available on Heinonline.  By this time, Solberg was also deep into a period of study of the copyright laws that would leave him the undisputed master of them.  His first major work was a study of every copyright enactment in the United States up to 1900, published that same year.  In February of 1905 he followed that with his study Copyright in Congress: 1789-1904, which chronicles every action regarding copyright in Congress, including failed bills and long-forgotten petitions and memorials.  By the time the revision process began, Solberg had quite literally read every proposed copyright law in this Country’s history.

Following the Spring 1905 conference, Solberg and his small staff at the Copyright Office began the project of drafting a copyright bill out of the suggestions and comments made.  By the Spring of 1906 a bill was ready, and was published along with comparisons to the current statute.  The bill was introduced in May of 1906, and underwent extensive revision – with Solberg in consultation every step of the way.2  The Librarian was also involved in the discussion as the bill moved forward, but the Copyright Office had become the experts on copyright law. As mentioned, Solberg would stay in office until 1930, serving alongside the Librarian he had helped appoint all along.  Even after his retirement the Copyright Office maintained its position as the governmental experts on copyright, and further existed as a largely independent agency ingrown into the Library of Congress, left alone by Librarians who had other priorities – and who also were not prepared to bring the requisite subject-matter expertise in copyright to bear.

Assistant Professor at the Southern Illinois University School of Law. I've written a fair deal about the evolution of intellectual property law into its present form, this blog is a way to share things that don't fit into a full-length article.